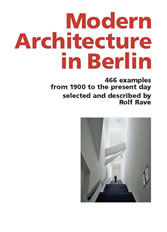 Although Berlin’s history encompasses more than eight hundred years and its beginnings reach back as far as the twelfth century, its present-day urban image is essentially characterized by structures and buildings dating from the nineteenth and twentieth centuries. Four “modern” development phases, whose respective qualities were vastly different, played a determining role in this image: during the second half of the nineteenth century, against the backdrop of industrialization, Berlin’s rise from a comprehensible Prussian capital and residence to an expanding metropolis of the German Empire, the 1920 consolidation of the city with the surrounding ninety-three townships, rural communities and properties to form “Greater Berlin”, following the destruction of the Second World War, working “back to back“ politically, territorially, and regarding the appearance of Berlin as a divided, urban structure until 1990, and from the reunification to the present day, the ongoing structural and spatial connections as well as architectural refinements required for Berlin’s role as capital of the new Federal Republic.
The contents of this architectural guide vividly stand out against the backdrop of Berlin’s recent history – a course of events as multifaceted as it was, in part, excessive, up until today. This publication deliberately focuses on the city’s last one hundred years when, generation by generation, Berlin daringly and almost obsessively rediscovered itself architecturally. The selected examples not only convey a visually impressive and representative longitudinal progression, but also in which form the most provocative of social movements, changes and breaks presented themselves in the architecture of the city. With texts and images, the book presents 466 architectural works built from 1907 to the present day. The author’s choices support the greater intention to present what can now be deemed contemporary, typical, and exemplary about every period of Berlin’s diverse, irregular, and amazingly rich architectural history. That the examples offered here blatantly declare themselves products of the “Modern age”, and “Neues Bauen” permits them to be understood as a “manifesto in images” which consolidates to a twentiethcentury architectural collage, whose quality and wide range grant it an unquestionable uniqueness.

Rolf Rave is an architect practising in Berlin together with his wife Roosje. He comes from a family of architects and art historians, his father, Paul Ortwin Rave, director of the Berlin Nationalgalerie until 1950 and director of the Berlin Kunstbibliothek from 1950 to 1961, was the editor of Karl Friedrich Schinkel. Lebenswerk from 1939 until his death in 1962.