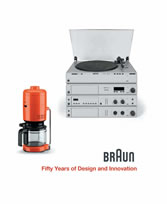 Braun products have been shown more frequently at exhibitions than those of any other comparable company. Some people find that they reflect basic human values such as authenticity and integrity. For others, they are the very incarnation of German perfectionism. Braun is not merely a trademark, it stands for an allencompassing concept. For the last five decades, this concept has spawned innovative products with an unprecedented regularity that begs to be explained â especially as the era spanned by the history of Braun Design is not exactly one characterized by continuity. The second half of the 20th century witnessed a dramatic change in living conditions. Prosperity and greater ease entered our daily lives, but also widespread disorientation and alienation. It is to the credit of those who set the Braun Design project in motion that they were able to counteract this feeling of alienation â which manifested itself to them not least in poorly designed objects of daily use â with a vision of design reform. There had already been attempts made along these lines. What was new was that a commercial enterprise spearheaded the movement. Also new was the systematic approach, the application of design principles to modern products and the innovative dynamic thus triggered. Finally, the considerable commercial success this design project enjoyed was likewise a revelation. All of this led the company to establish a design department that was not merely an appendage, but rather an active decision-maker in the development of products from the initial idea to realization. This is how Braun and design became synonymous.

Bernd Polster is one of the best-known German design authors. Nearly all of his books have been translated into other languages as well. His most recent publications are German Design for Modern Living (2008) und bauhaus design (2009). During his university studies Polster tried to learn dialectical thinking from philosopher Leo Kofler.