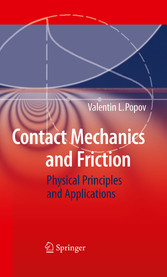 The English edition of 'Contact Mechanics and Friction' lying before you is, for st the most part, the text of the 1 German edition (Springer Publishing, 2009). The book was expanded by the addition of a chapter on frictional problems in ear- quake research. Additionally, Chapter 15 was supplemented by a section on elasto-hydrodynamics. The problem sections of several chapters were enriched by the addition of new examples. This book would not have been possible without the active support of J. Gray, who translated it from the German edition. I would like to thank Prof. G. G. - charyan and Prof. S. Sobolev for discussions and critical comments on the chapter over earthquake dynamics. Dr. R. Heise made significant contributions to the - velopment and correction of new problems. I would like to convey my affecti- ate thanks to Dr. J. Starcevic for her complete support during the composition of this book. I want to thank Ms. Ch. Koll for her patience in creating figures and Dr. R. Heise, M. Popov, M. HeÃ, S. KÃ¼rscher, and B. Grzemba for their help in pro- reading. Berlin, November 2009 V.L. Popov Preface to the German Edition