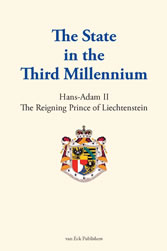 The State in the Third Millennium

The State in the Third Millennium

What should the state look like in the third millennium? That is the question addressed in this book by Hans-Adam II, The Reigning Prince of Liechtenstein, drawing on two decades of experience as ruler of a constitutional monarchy.
Prince Hans-Adam is able to look at the modern nation-state from many different angles: as a head of state, as a politician, who had to win popular votes in a direct democracy, as a businessman active in different continents, and as an historian who has studied the influence of military technology, transportation, and the economy on the workings of the state.
The State in the Third Millennium analyzes the forces that have shaped human history in the past and are likely to do so for the foreseeable future. Prince Hans-Adam explores strategies on how to realize worldwide the modern democratic constitutional state in the third millennium. He observes that citizens should no longer be viewed as servants of the state, but rather that states be converted into benevolent service companies which serve the people as their customers.
Prince Hans-Adam’s explorations of governance range wide, including his analysis of direct and indirect democracies via the experience of the American Revolution and the Swiss Constitution of 1848. He draws lessons on opportunities for reform derived from his own observations of Liechtenstein’s paths to political reform.
This is an elegant, original, and lucidly argued work which will attract all students and observers of modern statecraft.