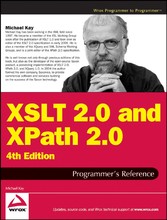 Combining coverage of both XSLT 2.0 and XPath 2.0, this book is the definitive reference to the final recommendation status versions of both specifications. The authors start by covering the concepts in XSLT and XPath, and then delve into elements, operators, expressions with syntax, usage, and examples. Some of the specific topics covered include XSLT processing model, stylesheet structure, serialization, extensibility, and many others. In addition to online content that includes error codes, the book also has case studies you'll find applicable to your own challenges.

Michael Kay has been working in the XML field since 1997; he became a member of the XSL Working Group soon after the publication of XSLT 1.0, and took over as editor of the XSLT 2.0 specification in early 2001. He is also a member of the XQuery and XML Schema Working Groups, and is a joint editor of the XPath 2.0 specification. He is well known not only through previous editions of this book but also as the developer of the open source Saxon product, a pioneering implementation of XSLT 2.0, XPath 2.0, and XQuery 1.0.
In 2004 the author formed his own company, Saxonica, to provide commercial software and services building on the success of the Saxon technology. Previously, he spent three years with Software AG, working with the developers of the Tamino XML server, an early XQuery implementation. His background is in database technology: after leaving the University of Cambridge with a Ph.D., he worked for many years with the (then) computer manufacturer ICL, developing network, relational, and objectoriented database software products as well as a text search engine, and held the position of ICL Fellow.