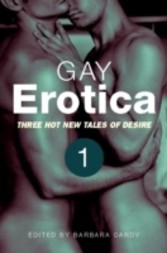 FUMBLER ON THE ROOF by Landon Dixon He was a one-man wrecking crew, an occupational hazard to his workmates on the roofing crew. But his ultra-understanding boss saw something in the error-prone, unco-ordinated man, and was determined to make him safe . . . BOB & CAROL & TED (BUT NOT ALICE) by M. Christian Bob's sexy wife encourages him to talk about his gay affair with a college friend, knowing it's going to make him rock hard for her. Just as she's about to get her reward, their friend Ted turns up at the house. What a perfect opportunity to put fantasy into practice! DISCIPLINARY LOVE by P. J. Rosier There's the right husband for every naturally inclined 'wife' as our young man discovered. It's just a matter of finding him. And then accepting that a 'wife' must sometimes be taken in hand - for his own good. RIDING THE RANGER by Julian Benedict A beautiful young man who happens to be a double amputee is accustomed to attracting a significant number of men who are sexually aroused by the combination of his beauty and his handicap. Yet it is not until he has an incomparable sexual experience with a forest ranger on an evening flight in a Boeing 777 that he discovers what it's like to be royally fucked.