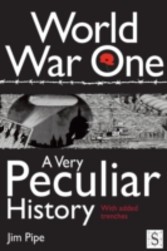 With the centenary of the outbreak of the The Great War coming in 2014, 'World War One, A Very Peculiar History' commemorates the events of the time by looking at some of the incredible lengths, no matter how risky or bizarre, people went to to defend their country. From Front pigs to hairy beasts, author Jim Pipe looks at the nicknames coined at the time, while providing mind-boggling lists and figures about the battles, the equipment used and the harsh conditions the troops faced. Laced throughout this chronological description of the events leading up to and during the war are tales of human endeavour, charity and daring - some scary, some quirky, and some truly unbelievable. So take the time to take in the sheer scale of sacrifice, destruction and political tension that World War One resulted in, because we won't be able to ask first-hand what it was like to fight in World War One for much longer.