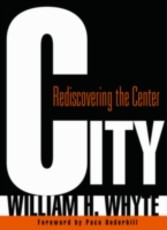 Named by Newsweek magazine to its list of ",Fifty Books for Our Time.",For sixteen years William Whyte walked the streets of New York and other major cities. With a group of young observers, camera and notebook in hand, he conducted pioneering studies of street life, pedestrian behavior, and city dynamics. City: Rediscovering the Center is the result of that research, a humane, often amusing view of what is staggeringly obvious about the urban environment but seemingly invisible to those responsible for planning it.Whyte uses time-lapse photography to chart the anatomy of metropolitan congestion. Why is traffic so badly distributed on city streets? Why do New Yorkers walk so fastand jaywalk so incorrigibly? Why aren't there more collisions on the busiest walkways? Why do people who stop to talk gravitate to the center of the pedestrian traffic stream? Why do places designed primarily for security actually worsen it? Why are public restrooms disappearing? ",The city is full of vexations,", Whyte avers: ",Steps too steep, doors too tough to open, ledges you cannot sit on. . . . It is difficult to design an urban space so maladroitly that people will not use it, but there are many such spaces.", Yet Whyte finds encouragement in the widespread rediscovery of the city center. The future is not in the suburbs, he believes, but in that center. Like a Greek agora, the city must reassert its most ancient function as a place where people come together face-to-face.