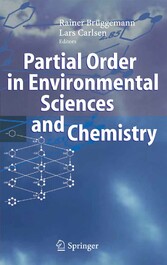 This book explains the theory and practice of order relations in such a way that no specific mathematical skill is needed to understand the advantages of this algebraization. It acts as a primer in a mathematical technique which is useful in many expanding disciplines, like genomics, techniques of decision support, and sustainability. This book is recommended to those who are interested in the interface between sciences and management.


Rainer BrÃ¼ggemann studied chemistry at the Ludwig-Maximilians University, Munich. He received his PhD in 1977. He joined a research group in 1980 at the Technical University of Berlin. 1984 saw him move to the GSF - National Research Center for Environment and Health in Neuherberg near Munich. Since 1996 he is senior scientist at the Leibniz-Institute of Freshwater Ecology and Inland Fisheries, Berlin.

Lars Carlsen studied chemistry at the University in Copenhagen. He received his PhD in 1977 and his DSc in 1989. In 1991 he joined the National Environmental Research Institute in Denmark as Director of the Department of Environmental Chemistry. Since 1999 he has been an assigned professor in environmental chemistry at the Roskilde University, Denmark, and in 2000 he founded his own consultancy, 'Awareness Center'.