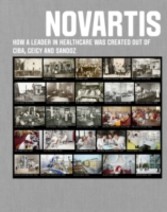 Novartis - How a leader in healthcare was created out of Ciba, Geigy and Sandoz

Novartis - How a leader in healthcare was created out of Ciba, Geigy and Sandoz

The Swiss pharmaceutical industry is world-famous, and of today's top five global pharmaceutical businesses, two are Swiss - Roche and Novartis. Novartis was created in 1996 from a merger between three other major companies, Ciba, Geigy and Sandoz (the merger was the biggest ever in business history worldwide up to that point), but despite being a relatively new name, it is rooted in over 150 years of history. Focusing on the emergence of Novartis, this authoritative book is also the fascinating story of how Switzerland's pharmaceutical industry grew out of early dye-production for textiles in the mid nineteenth century, scored major triumphs with the introduction of products such as DDT and Valium in the twentieth century, and developed into the far-reaching international healthcare providers of today.