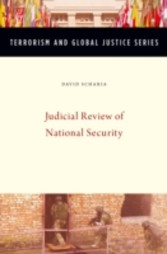 In recent years, countries around the world introduced numerous national security programs and military campaigns. Despite the complex legal questions they raise, very few of these measures have been the subject of rigorous judicial review. Nevertheless, the absence of real-time review has had an enormous effect on human rights, rule of law, and on national security. The Supreme Court of Israel provides an excellent case study of a different approach, which allows judges to assess military action in real-time and to issue non-binding results of their evaluation. This raises the question: How was the Court actually able to uphold this challenge? In Judicial Review of National Security, David Scharia explains how the Supreme Court of Israel developed unconventional judicial review tools and practices that allowed it to provide judicial guidance to the Executive in real-time. In this book, he argues that courts could play a much more dominant role in reviewing national security, and demonstrates the importance of intensive real-time inter-branch dialogue with the Executive, as a tool used by the Israeli Court to provide such review. This book aims to show that if one Supreme Court was able to provide rigorous judicial review of national security in real-time, then we should reconsider the conventional wisdom regarding the limits of judicial review of national security.