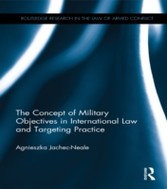 Concept of Military Objectives in International Law and Targeting Practice

Concept of Military Objectives in International Law and Targeting Practice

The concept that certain objects and persons may be legitimately attacked during armed conflicts has been well recognised and developed through the history of warfare. This book explores the relationship between international law and targeting practice in determining whether an object is a lawful military target.By examining both the interpretation and its post-ratification application this book provides a comprehensive analysis of the definition of military objective adopted in 1977 Additional Protocol I to the four 1949 Geneva Conventions and its use in practice. Tackling topical issues such as the targeting of TV and radio stations or cyber targets, Agnieszka Jachec-Neale analyses the concept of military objective within the context of both modern military doctrine and the major coalition operations which have been undertaken since it was formally defined.This monograph will be of great interest to students and scholars of international law and the law of armed conflict, as well as security studies and international relations.