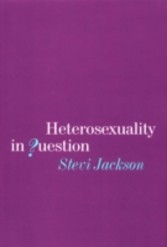 With heterosexuality currently being examined more rigorously than ever before, this accessible and engaging book charts the development of feminist and sociological theorizing on sexuality and the emergence of a radical critique of heterosexuality. Stevi Jackson reviews a range of important theoretical and substantive issues, and she demonstrates an important shift in feminist thinking from an emphasis on male dominance within heterosexual relations to a critical perspective on heterosexuality itself. Her book will be relevant to scholars and students in the fields of women's studies, lesbian and gay studies and the sociology of sexuality.