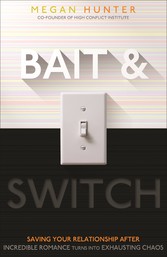 Author note: Gender is used interchangeably throughout this book.

If only Iâd collected a dollar from every client who, in an exhausted voice, starts the conversation with (and usually theyâre either whispering or loudly ranting), âYou have absolutely no idea what a nightmare Iâm living. Other people may have some pretty awful relationship war stories, but, believe me, youâve never heard anything like this. Iâve looked the devil in the eye and barely survived. I think my partner has a chemical imbalanceâprobably bipolar.â

There is no point in telling them Iâve heard the same thing countless times from countless people. Really, we could just skip the entire story part and go straight to the âwhat to doâ part, but we donât. Instead, I give them my full attention and listen to their account of the relationship terrorist (their words) to whom they have given their heart. For some, itâs the first time theyâve dared utter their story out loud. For others, it is the first time anyone has listened and understoodâa validating experience that brings relief. The stories all have similar elements and patterns.

âShe threatens, manipulates, and controls me, and I canât tell you how many times sheâs thrown her wedding ring out the window. When Iâm with her, we can have the most amazing time together, but as soon as I go to work, hang out with my friends, stop by my parentsâ house, have an important board meetingâanythingâshe has an emergency and does everything in her power to get me to come home so I can fix it and make her feel better. Sometimes it works and then we go back to a somewhat calm norm. I may even get a tearful apology. Many times it doesnât work and we end up going in endless circles until I want to scream or head straight out the door. It almost seems intentionalâto the point of sabotageâbut itâs hard to imagine anyone intentionally behaving this way.â

âItâs a rare day when we do not have an argument. Some days are simply exhausting. Others are rage and chaos. Iâm nearing my breaking point. I could give her a million dollars, buy her an estate on the French Riviera complete with a Maserati in the garage, and give her 100% of my time, but sheâd still be unhappy, complain about it, and blame me for ruining her life. She says I donât include her in my life; she doesnât feel accepted by me or my family and friends; and that I make her feel bad. Most conversations start with the phrase âyouâ and finish with the list of ways Iâve screwed up and made her miserable.â

âWhen we argue, itâs almost as if every word I say is sliced in half by her verbal sword. No matter how much I try to explain my point of view or try to get her to understand something seemingly logical, I lose. Even walking away to help calm the situation seems to amp it up instead of wind it down.â

âAt first, it was totally shocking, but I was able to forgive her behavior and move on. Over time, however, Iâve realized that it always goes back to âawfulâ even though I know what to watch for now and how to structure my life to avoid these disruptions. She still manages to catch me by surprise and propel my world into the darkest depths. It sort of goes from heaven to hell; light to dark; calm to storm; all good to all bad. Iâm the best, and then Iâm the worst. Itâs like living in opposite worlds but never knowing which world to anticipate at any given time. Sheâs destroying my health, my finances, my family, my job. Soon Iâll have nothing left, and even though I love her, itâs becoming clear that I donât have a clue how to make this work.â

âSheâs threatened to have me thrown in jail for abuse or to âexposeâ me for the fraud I am to my company. Even though I know I havenât abused her or anyone, nor have I defrauded my company, sheâs so convincing and so emotional about it that Iâm afraid others might believe her. She can be the most vindictive person, and then be completely kind, gentle, and sweet to someone else in the next breath.â

âThe worst times are when she threatens to hurt herself or says she feels like dying, which usually happens right when I have something major going onâlike an important meeting (causing me to choose between the two) or a family gathering (which she refuses to attend because my family treats her so bad).â

âItâs a horrible feeling to be responsible for someone elseâs life and happiness; it feels like a full-time job. I want both of us to be happy, but everything I do seems to backfire.â

âIâm not getting any sleep because Iâm worried that she will either attack me or hurt herself. Other times she wakes me in the night to talk about our relationshipâagain. Honestly, I just want to run far, far away. I donât know how much more I can take of the chaos, but I feel completely trapped and isolated. If I stay, my life is hell and she doesnât get better. If I leave, I worry that she wonât survive even though my gut says these are just threats. I feel torn between my parents and my wife because she wants me to side with her against them.â

Does this Trajectory Really Happen?

While we want to believe that relationships like this only happen in the movies, or to people we see on the news, or in an episode of 48 Hours, in actuality they are shockingly common and seem to be on the rise. Notwithstanding the stories reflected above, people generally donât talk about being in such chaotic relationships, not even to their closest friends or family, either because they are embarrassed or because they donât think anyone would believe them. After all, it sounds so incredibly outlandishâplus, their partner would âcream themâ if they found out they had told others. It seems to be an impossible dilemma. However, if youâre in this kind of relationship, you likely know exactly what Iâm talking about.

The scenarios Iâve described above may be extreme examples, but they unfortunately are not uncommon. Though some high-conflict relationships are somewhat more subtle and less extreme, they still follow a similar pattern of chaos and relationship sabotage and will benefit from the same strategies.

After reflecting on the disturbing stories about the romantic relationship evolving into a series of exhausting and chaotic interactions, we need to back up to the beginning and look at how these relationships get started. No one intentionally seeks a romantic partner who will make life miserable, so how and why does it happen? It usually starts like this:

âAt the beginning, we had the most incredibly intense spark! He was charming, sweet, nice, funny, and totally adaptable. In fact, he was so adaptable that he seemed to just blend right into my lifeâthe perfect match. We had the same hobbies, likes and dislikes, tastes in music and movies. Basically, everything I liked to do, he liked to do. My dreams were his dreams. My goals were his goals. We were totally and absolutely compatible and in sync.â

âHe understood my personality, my character, my emotions, and my ambitions. He was supportive of my career and my relationships. We had fun. We traveled. We fell in love so completely and quicklyâit went from zero to sixty in the blink of an eye. Within days, he was spending nights at my place, and even began leaving things like his toothbrush at my house. Our sex life was intense. It wasnât long before we were living together, although we had never actually discussed it. Even though it seemed a little fast, it just felt good and it was so intense. He was completely available, romantic, and met my needs in every way. Rose petal trails from the front door to my bedroom, champagne, romantic trips. It was the best time of my life!â

The Spark and Chemistry

Many describe an intense spark at first meetingâsomething that we believe indicates weâve met âthe one.â That spark has the power to override our sensibilities and convince us to ignore any and all red flags. Some people describe it as chemistry. âWe have amazing chemistry!â âThe chemistry between us is unmistakable, something Iâve never felt before!â

Unfortunately, we mistakenly identify the spark and chemis try as a positive and confirmatory sign of future relationship success when in reality it should serve as a yield or warning signâa sign to slow down and take things one step at a time. Iâm not saying that every spark is wrongâjust that it might point to problems down the road with a particular personality type. The âsparkâ might well mean caution. âChemistryâ might be a red flag.

So what causes a seemingly amazing relationship to turn into a nightmare?