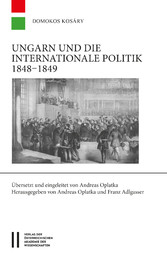 
The late work of the great Hungarian historian Domokos KosÃ¡ry, Ungarn und die internationale Politik 1848-1849 [Hungary and International Politics in 1848-1849], deals with a much written-about subject. Yet no other historian has ever presented it in the way KosÃ¡ry does. The conflict between Austria and Hungary, leading to a war in the early autumn of 1848, is described by KosÃ¡ry in a general survey of European opinions and interests of that time, as they existed in London and Paris, St. Petersburg and Istanbul, Turin, Belgrade and Bucharest. He also describes the activities of exiled Eastern-Central-European personalities in great detail, especially those undertaken by the Polish prince Czartoryski. As a result, he shows that England, the leading European power at that time, did indeed feel a certain sympathy with the Hungarian war of independence but British foreign policy, shaped by Palmerston, consistently and sharply opposed Hungary's secession. In London's view, a strong Austrian Empire in the middle of the continent remained a strict necessity due to its function as a counterweight to Russia. The Hungarian government, born in the revolution of 1848, had overestimated its international elbow room. In addition, it complicated Hungary's situation by a long-lasting, firm policy against the autonomy-ambitions of national minorities. True, the possibilities for the Hungarians were greatly restricted as the Austrian side never showed any readiness to negotiate with 'rebels'. KosÃ¡ry's conclusion, with regard to the past as well as the present and addressing Hungary (and all small countries), reads as follows: since the early 16th century, autonomous policies in Europe have only worked within borders created by changes in the European system. Only within the respective margin can damage be minimised or advantages perceived.