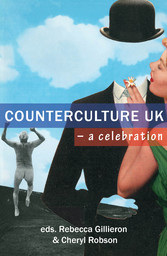 
- It's an alternative lifestyle...
- The ideas that spread a revolution...
- A movement that changes the world...


This new collection of essays celebrates the incredible originality of British post-war culture. British Art, film, theatre, dance, literature and music have attracted international recognition, from the Angry Young Men to the Sex Pistols to Grayson Perry. Now gaming, the internet and social media enable creative communities to flourish and either fight for social justice - or just be entertained,.
Can we find the creative inspiration to succeed in a post-capitalist future?

'...a wonderfully scholarly, readable and useful treat on the perils of labelling culture.'Â - Helen Lederer, Comedienne

'It is the delinquents, deviants and subversive Counterculturalists that embody the true grittiness of British Culture. Subversive and volatile beings of anarchy, freeing the masses from the commodification of commercialised 'expression'. Lurking in the margins, Mark Edwards in Counterculture UK - A Celebration, expresses the liberated and reactionary nature of dance to mainstream culture through his euphoric exploration of free expression, movement and identity. A sensitive reflection of the youth within the 'northern powerhouse' during socially and politically turbulent times that hyperextends itself to our present day discourses. As dance is digitised through meme and viral media so to does the Counterculturalist, constantly dancing their own revolution and liberating those who dare to be free in expression.' *****Â - Kristian Gath, QWERTY Theatre

'This is a good introduction to a diverse range of topics, some of which, of course, will hold more interest than others, but I think overall most are dealt with in a knowledgeable and capable way. The writers know the subjects well enough that they can provide a clear overview as well as zoom in on the specific events or people who drove the movement or changes within the different fields and I like that we get different voices for each chapter. There is nothing new or revolutionary in the book and the examples provided for most of the topics would be well-known (to the point of mainstream...) to most people, but I still rather enjoyed reading the individual essays and seeing it in a context where the impact of certain events are shown on a variety of different stages.
The book can be used as a short starter to the different subjects. If you want to delve deeper, there is not much help in the book, but as long as you are aware of that from the outset, I doubt it will disappoint.' **** - JBM 1776 Amazon 100 Reviewer

'I found it interesting when the author questioned the idea of whether 'counter culture' declines when it becomes the 'culture' and is therefore no longer pushing against anything. I also enjoyed the way the author reminded the reader that the new technology of today's world really helps give space for people to explore their interests/fantasies and share them with others. I wonder where that will take us in the future?'Â  Â  Â ****Â  Â -Â  Â Gemma Raishbrook, Amazon