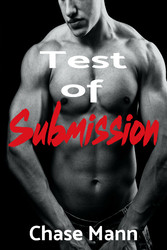 However, the opposite was true. He needed to be dominated and yearned for a Master who could bring him to heel. He was hoping this Master would be the one.

But before he could be accepted he had to pass the Test of Submission.'