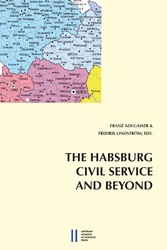 The volume combines the papers presented at a workshop in Vienna in April 2015 and offers new insights in the working of the Imperial Austrian and the Royal Hungarian civil service since the middle of the 19th century and its aftermath in the interwar period. The essays deepen the understanding of the bureaucracy, its working and its importance for the functioning of the state, parallel to similar research in the field of politics or imperial identity. Individual and collective biographical studies of different levels of the bureaucracy, central ministries, provincial and local administration, as well as the judiciary, provide an intersection of the main groups of the state administration. Other articles give an overview of the field and contribute to tying together the studies of different individuals and groups of civil servants in an overarching perspective, pointing out the role of the bureaucracy as the nexus between state and society. Together, the volume provides a good survey of different levels of the Habsburg bureaucracy and its aftermath. It sharpens the view for a better understanding of the Habsburg civil service as a central aspect in the understanding of this Empire in the heart of Europe and its pivotal role not just for the history of this area, but also for modern European history as a whole.