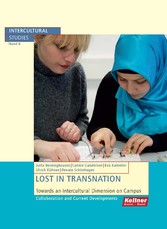 Lost in Transnation - Towards an Intercultural Dimension on Campus

Lost in Transnation - Towards an Intercultural Dimension on Campus

The European University Viadrina and its Need for an Intercultural Competence Program
The European University Viadrina in Frankfurt (Oder), with a student body of around 30 % international students from over 70 countries, and an extensive network of partner universities, is one of the most international universities worldwide. Situated on the German-Polish border, it represents a cross-border university, with a highly symbolic political meaning for a Europe that is increasingly intertwined and interconnected. In addition to this, the Viadrina is supposed to be a precursor institution as a place to acquire intercultural competence.

However, empirical reality has shown that communicative interaction between students of different nationalities was very limited. Several surveys have proven that the desired contacts between students had not been established.

Altogether, we can conclude from these results that an accompanying preparation for the students of the Viadrina concerning the intercultural environment was missing. Not only a lack of intercultural knowledge was to be observed, but also a lack of curiosity toward others and deficits in behavioral skills. As the problems were not limited to the Viadrina (Isserstedt &, Schnitzer, 2002, Bosse &, Harms, 2002, Heublein et. al, 2008), all German universities are challenged to find new ways of sensitizing their members to intercultural problems and helping them to develop intercultural competence.

Taking this in consideration, we started in 2004 to explore how we could enhance the proclaimed „intercultural competence“ in an international institution like the European University Viadrina. Furnham &, Bochner had already suggested in 1986 that the students’ preparation for intercultural contexts in Social Skills Training could prevent misunderstanding and conflicts on a communicative level (compare Furnham &, Bochner, 1986, p. 204). But in our case, as in most German universities, there were no pre-existing measures of this kind. Concerning the Viadrina and its intercultural potential, the first challenge was to awaken interest in communicative exchange without having to force it. At the same time, the students should be made aware of what kind of enrichment (and learning) intercultural contact can offer, as according to Isserstedt &, Schnitzer, the enriching side-effects of intercultural contact between German and foreign students „has up to now been mainly overlooked and not sufficiently systematically used“ (Isserstedt &, Schnitzer, 2002, p. 57).