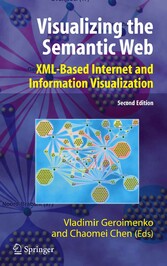 The Web is undergoing revolutionary changes - its second generation is emerging. The key player in the new generation is not HTML but XML (this is why it is also known as 'the XML-based Web'). If the appearance of web pages is a major concern in the first generation, then the meaning (or semantics) of information on the Web is the focus of the second generation, which is why it is also called 'the Semantic Web.' The new edition of the pioneering monograph on Visualising the Semantic Web has undergone a number of changes in order to reflect recent research results, web standards, developments and trends. In this new edition, 2 chapters have been removed, 4 new chapters have been added and the 10 remaining chapters have been completely revised and updated.